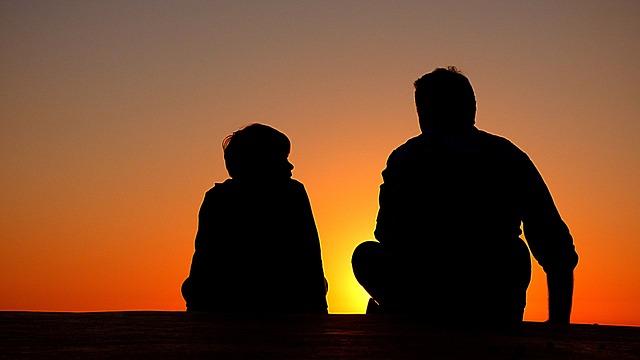 “I guess this is our last goodbye
And you don’t care, so I won’t cry
But you’ll be sorry when I’m dead
And all this guilt will be on your head
I guess you’d call it suicide
But I’m too full to swallow my pride
I can’t, I can’t, I can’t stand losing
I can’t, I can’t…

Many parents currently in their midlife may be familiar with these lyrics from a 1978 Police song. Similar threats have been made by teenagers in real life. But, to parents and other adults, they seem like immature, empty threats to be ignored. On the other hand, suicide is frequently linked with clinical depression. Major depression is a mental illness that sometimes burdens one with such intensely negative thoughts that suicide seems like the only escape.

Most of the time teenagers who hurt themselves do not want to end their lives. They just want to put an end to the painful emotions they are experiencing. And, it is only chance that separates an attempted suicide from a fatal suicide. Hence, midlife parents who have teenaged children have to view all suicidal behaviours and threats as calls for help.

All teenagers do not think of harming themselves. And, the good news is that we now have a better understanding of why that is so. We have also been able to identify factors that make some teenagers more vulnerable to suicidal thoughts. This gives us many opportunities, as parents in midlife and adults, to intervene. To make changes that help reduce the pressure young people go through. To be more involved in kids lives, to listen, understand and support them through their struggles.

Risk factors for suicide amongst teenagers

Researchers have identified the following suicide risk factors that midlife parents can watch out for. Many teenagers who meet the following criteria may never hurt themselves. But the following factors do increase the chances of some young people attempting suicide.

The following are common factors that increase the chances of a teenager attempting or completing suicide at some point in time.

– Having made one or more suicide attempts in the past
– Having been diagnosed with depression or bipolar disorder, eating disorders or tendency to behave in an aggressive-impulsive way
– Engaging in alcohol, drug or substance abuse of any kind
– Being 16 years old or older ( kids this age are more independent and not constantly monitored )
– Being a boy – While both boys and girls attempt suicide, boys tend to use more lethal means
– Having experienced abuse of any kind, including sexual or physical abuse
– Being gay or transgender
– Not having supportive relationships, that is, friends and adults they feel comfortable reaching out to for help.
– Relationship issues that includes family discord or fighting, bullying or being ostracised at school.
– Financial problems
– Suicide contagion – young people tend to get influenced by media coverage of suicides, especially those involving famous people or celebrities. They are also influenced by suicides committed by family members, people in their neighbourhood, school or others who seem to have a similar background or issues as them.

The following factors show that a young person is currently in great distress and may attempt suicide. Parents need to keep a particularly close watch on a young person who shows any of the following. Getting help for their child as well as for themselves becomes crucial at such a time.

– Showing a drastic change in personality. For example, from being a social, outgoing, confident young person, becoming very reclusive, irritable, angry or withdrawn.
– Having recently undergone some kind of a socially stressful situation. For example, public humiliation, bullying, break-up, or something viewed as a big failure/loss
– Expressing thoughts around death and dying in conversations or through writing.
– Loss of ability to think clearly and logically.
– Extreme feeling of hopelessness.
– Overwhelming emotional pain or distress.

Factors that protect teenagers from suicide

Research has shown that there are two specific family related factors that protect children from suicide. These include:

Warm and caring behaviours are the hallmark of well connected families. Such families are able to role model better coping behaviour. Family members are able to openly express their feelings. They also tend to resolve differences in more constructive ways. Family members talk and share what is going on in their individual lives. They know each other’s internal and external worlds. And, they are able to offer support to each other through difficult times. In addition, stable family relationships provide a sense of stability and security to a child that helps in his/her emotional growth.

Most parents instinctively do what is right for their child. But parenting teenagers is undoubtedly a very demanding and complex task. So, if you feel concerned about your child or overwhelmed with the issues he/she is facing, reach out for trained, professional help. Also, try to create a support system of caring grown ups for yourself and your child.

If your relationship as a couple in midlife is rocky, it is likely to have an impact on your child. Therefore, it is crucial that you get help in order to sort out your own relationship issues. It is never too late to start creating a sense of family connectedness. Even if you do so in midlife.

As parents, suicide prevention really begins with knowing one’s child. Who is he, how does she cope with emotional ups and downs, who are his friends, what is her everyday life like, is he getting bullied, is she having trouble with making friends, is he anxious about his studies, has her behaviour or academic performance undergone a change? The chin-up and deal with it strategy that schools and parents offer to young people, as that is the easiest, often fails.

One needs to listen to, try to understand, and help children problem solve from an early age. Warm, caring relationships foster emotional wellbeing. And, parents play the most crucial role in creating this warm, caring environment for their children. In order to do so, however, parents need to take care of their own emotional wellbeing first.

If you as a parent in midlife are finding it difficult emotionally to cope with challenges at work or home, get help. If you often feel overwhelmed by midlife issues or are resorting to food, alcohol, drugs, gambling, the internet or any other addictive behaviours to cope, then also seek help. If you feel angry and irritable often and take it out on your spouse or children, it is important to seek help.

It is important to address your personal issues not just for your own wellbeing but also for your child’s emotional wellbeing. If you are not feeling emotionally healthy you will not be able to help your child build his/her emotional immunity. In addition, you are the most important role model in your child’s life and he/she will learn how to cope with situations from you.

– At a societal level, adults need to be mindful of the language we use and the coping strategies we adopt when faced with difficult situations.

– Health professionals who come in contact with teenagers need to be trained to identify signs of depression and potential for suicide. Appropriate help needs to be made available. Currently in India, very few psychiatrists and clinical psychologists are adequately trained to work with teenagers. If a teenager has to be given psychiatric medications, it should only be administered by a child and adolescent psychiatrist. These medications can affect young people in ways that are very different from the way they affect adults. Sometimes the effects can even be harmful.

– In rural India, agricultural pesticides are often bought and stored in large quantities. These become the most popular means of impulsive self harm when a person is upset. Selling pesticides and medications in packaging that is not easy to open may help, especially when the suicide attempt is an impulsive act. Parents need to store pesticides and medications in such a way that young people do not have easy access. Similarly restricting access to other means of suicide wherever possible may also help. For example, placing safety barriers around places, such as, train stations, bridges, etc., where suicide attempts are known to occur.

– Schools can also be places that can foster better coping behaviour amongst children. In India, the biggest challenge in rural and urban schools is curbing the culture of violence. Teachers need to become more sensitive towards their students. Bullying needs to stop. Tolerance for differences and cooperation engendered.

Aside from being diagnosed with a mental illness like depression, there are many other factors involved in teenage suicide. The good news about that is that it gives us many opportunities, as parents and adults, to intervene. To make changes that help reduce the pressure young people go through. To be more involved in kids lives, to listen, understand and support them through their struggles. To model better behaviour and encourage better ways of coping. To stop glorifying suicide or sensationalizing it on and off screen. This is why it also becomes crucial for parents to know their child’s temperament and the child’s world – the child’s friends, the status of their relationships, their activities, their interests, their worries, their ambitions, and through it all be a supportive presence. Be a stabilising presence.

If you or someone you know is currently in great emotional distress or have suicidal thoughts, please seek help.

Some suicide prevention helplines in India are:

If you live in any other country, you can get a list of country based suicide helpline numbers at:

If you are looking for ways to have a helpful conversation with someone who may be suicidal, you can take a free suicide prevention training at:

If you are a media person and are looking for media reporting guidelines, you can visit: